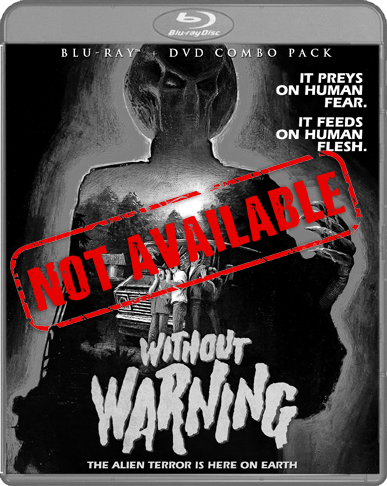 Without Warning (SOLD OUT)

A group of teenagers head out to the lake for a relaxing camping trip in the mountains. They ignore the warnings of the local truck stop owner and head to their destination. Things go terribly wrong when they run into an extraterrestrial who throws deadly discs that suck the blood of their victims. The group heads back to the truck stop for help from the eclectic group of residents – a crazy war veteran (Martin Landau, Ed Wood) and a determined hunter (Jack Palance, Batman).

“Scream Factory’s special features are really great here, so fans of the film will definitely want this one on their shelves.” – Bloody Disgusting

"Without Warning is one of the most exciting releases of 2014...There is a load of interviews, a commentary, stills and reversible cover art. The film also looks beautiful on Blu-ray. Oh, let's mention the fact that Without Warning being on home video in the first place is a feat within itself. A bare bones edition would have been a massive triumph in itself, but no, Scream Factory won’t just let it go at that. They truly showed some love to this title and its a fun and splendid addition to their incredible catalog.” – Why So Blu

“Scream Factory has really put together an amazing package for their Blu-ray release of Without Warning. We get the uncut version of the film, in high definition, with HD audio, and a ton of special features.” – Shawn Savage, Liberal Dead