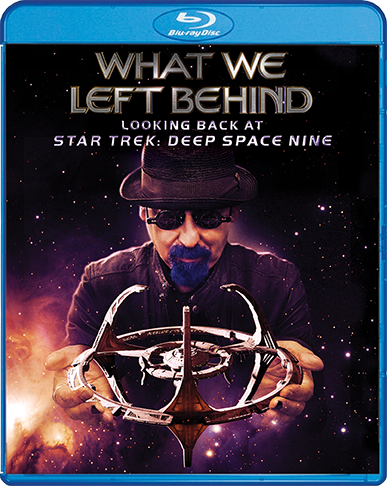 What We Left Behind: Looking Back At Star Trek: Deep Space Nine

Product Note: The 2-disc special edition version has SOLD OUT as of October 7, 2019.

What We Left Behind: Looking Back At Star Trek: Deep Space Nine celebrates the 25th anniversary of the self-proclaimed "black sheep" of the Star Trek spin-off series. Often described as dark and edgy, Deep Space Nine was maligned by many fans and critics at the time as a show that did not fit into Gene Roddenberry's vision of the future. But now, two decades after it left the airwaves, Deep Space Nine is being re-discovered by new, younger fans through streaming services, and championed by those who stuck by it from the start.

Through extensive interviews and behind-the-scenes stories with the cast and crew, this full-length documentary, helmed by directors Ira Steven Behr (original Deep Space Nine showrunner) and David Zappone (The Captains, For The Love Of Spock), delves into the newfound resurgence of this oft-overlooked and polarizing sci-fi series, presents footage from the show remastered for the first time ever in High Definition, and reassembles the writing staff to break what would be an imaginary future episode of Deep Space Nine.

What We Left Behind: Looking Back At Star Trek: Deep Space Nine