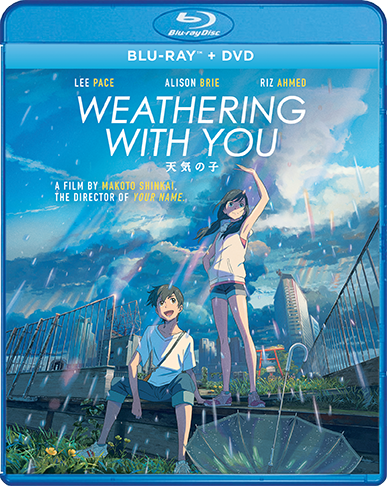 From Makoto Shinkai, the director of the global smash hit Your Name., comes a critically-acclaimed new romantic drama set in the rain-soaked streets (and skies) of modern Tokyo. The summer of his high school freshman year, Hodaka runs away from his remote island home to Tokyo, and quickly finds himself pushed to his financial and personal limits. The weather is unusually gloomy and rainy every day, as if to suggest his future. He lives his days in isolation, but finally finds work as a writer for a mysterious occult magazine. Then one day, Hodaka meets Hina on a busy street corner. This bright and strong-willed girl possesses a strange and wonderful ability: the power to stop the rain and clear the sky...

“I was blown away by the breathtaking filmmaking on display in Weathering With You. Without a doubt, the film stands as one of the best achievements in modern anime. It has been some time since I was so impressed by a non-Ghibli work. The combination of great storytelling and visuals make it a rare cinematic delight. The production values are outstanding and viewers won't want to miss out on this experience. The Blu-ray release feature top-notch video-audio and there are plenty of extras to keep fans entertained. Highly recommended.” – Neil Lumbard, Blu-ray.com

“Makoto Shinkai is someone to pay attention to when you see his name in the director’s chair, and Weathering With You is probably his best yet. The film manages to be both bitter and sweet, with the darkness making room for the joy that is to come, and the visual treat that is the film’s animation will leave you in awe… Must Own for any anime fan.” – Michael Scott, AV Nirvana

“Weathering With You is one of the best anime films I’ve seen thanks to a great story and greater visuals with an amazing musical score at that. Fans of Shinkai’s work have already seen this and picked up their copy for sure. But if you’re looking for an awesome anime film that delivers, you’ll want to weather any storm to grab this Blu-ray for your collection.” – Chris Mitchell, Popzara.com

"This is about as close to perfect as a Blu-Ray disc can look." – Dillon Gonzales, Geek Vibes Nation