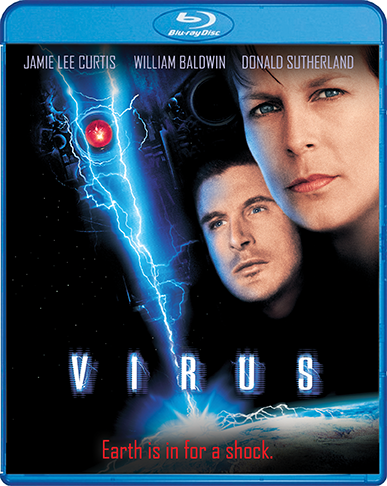 Jamie Lee Curtis faces a new, unstoppable terror in this sci-fi thriller from the producer of Aliens, Terminator 2, and Tremors.

Jamie Lee Curtis (Halloween, Scream Queens) plays the navigator of a tugboat crew which loses its cargo during a hurricane. In the calm eye of the storm, they come across a Russian research ship floating dead in the water. Boarding the vessel, they initially believe it to be deserted… but they soon realize they're not alone. First, they discover a terrified survivor (Joanna Pacula), and then they find that the ship has been taken over by a ruthless alien intelligence. Now, the small band must fight for their lives against an entity that has come to claim Earth for its own, and creates bio-mechanical monstrosities with one goal: eliminating the virus called humans.

“Virus is a very good "B" popcorn movie that moves fast and is cut together with efficiency, precision, and skill. Shout! Factory has outdone themselves with this excellent deluxe edition. The label has ported over Universal's commentary track, deleted scenes, and EPK featurettes. It adds four new segments consisting of fantastic interviews with the filmmakers and a new commentary with Bruno and Feldman. For fans of Jamie Lee Curtis and Donald Sutherland, this release comes HIGHLY RECOMMENDED.” – Dr. Stephen Larson, Blu-ray.com