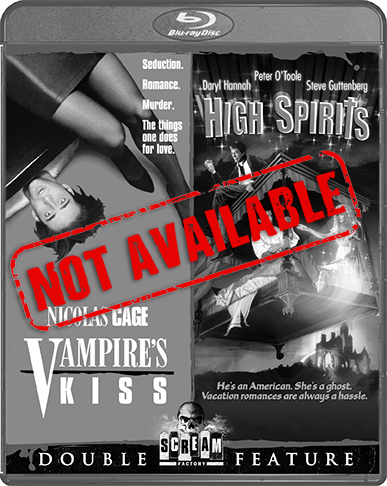 Get ready for high-definition haunts and ha-has from Scream Factory! This double feature presents a pair of paranormal favorites from the 1980s, available at last on Blu-ray!

Teetering on the edge of sanity, volatile literary agent Peter Loew (Nicolas Cage) tries to find purpose in his life through a cutthroat work ethic and a hedonistic night life. But when an encounter with a mysterious beauty leaves Loew convinced that he is turning into a vampire, his behavior turns positively outrageous.

Daryl Hannah, Peter O’Toole, Steve Guttenberg, Beverly D’Angelo, Jennifer Tilly, Peter Gallagher and Liam Neeson star in this hilariously haunting comedy! When a castle-turned-hotel owned by Peter Plunkett (O’Toole) falls on hard financial times, he comes up with an idea to turn the place into a tourist attraction by billing it as Europe's most haunted castle. But just when it seems he'll have to give up the ghost, some real phantoms show up — and they're none too thrilled about being exploited.