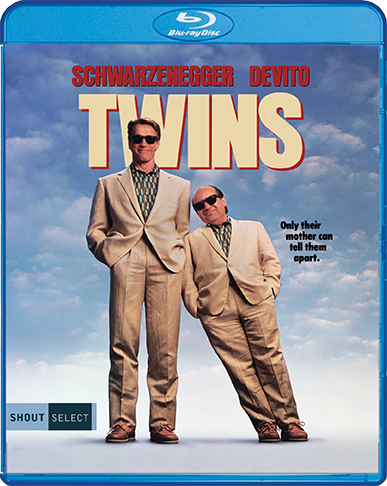 "The whole movie has a warmth about it that never slops over into sentiment: there is much more here than tall-guy, short-guy jokes." – Richard Schickel, Time

An ambitious genetic experiment takes a wrong turn when two twins — who look nothing alike — are born and then separated. Years later, the unlikely siblings meet: Julius (Arnold Schwarzenegger, The Terminator, Predator), a highly educated but sheltered giant with a big heart, and Vincent (Danny DeVito, It's Always Sunny in Philadelphia), a diminutive hustler with an insatiable lust for women and money. With girlfriends in tow and a hitman on their trail, the newfound brothers set off on a wild, cross-country misadventure to find their mother — but end up finding out more about themselves. Kelly Preston (Secret Admirer), Chloe Webb (Sid And Nancy) and Marshall Bell (Total Recall) co-star in this hilarious box-office blockbuster from director Ivan Reitman (Ghostbusters).