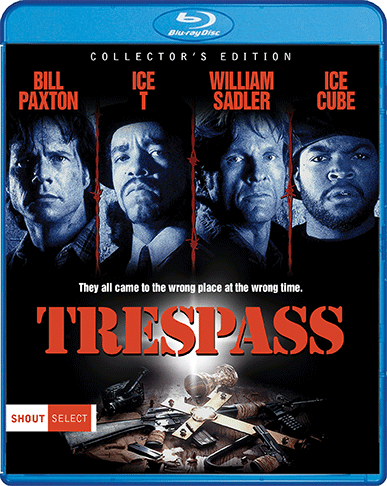 "Director Walter Hill's handling of the action is fluid and kinetic, making the film a pleasure to watch for the expertness of its craft." – Variety.com

Everyone wants a piece of the action – and the treasure – as Bill Paxton (Twister) and William Sadler (Tales From The Crypt Presents: Demon Knight) take on a ruthless gang in this high-caliber thriller. In the rubble of a four-alarm blaze, Vince (Paxton) and Don (Sadler), two Arkansas firemen, discover a map leading to a fortune in stolen gold hidden in an abandoned East St. Louis tenement. What they don't know is the building is headquarters to a vicious mob, led by the notorious King James (Ice T, Law & Order: Special Victims Unit) and Savon (Ice Cube, Friday, Ride Along). When the firefighters accidentally witness the mob executing some of their enemies, the trespassers become the gang's next target in this pulse-pounding thrillfest.

“Walter Hill’s lean thriller expertly balances stylized action with an engaging story filled with memorable characters. I’m extremely happy that Shout! Select resurrected this gem from obscurity. Fans of the film will be glad to know that they delivered a great A/V presentation with a respectable set of special features made exclusively for this Blu-ray. Trespass hasn’t looked or sounded this good on home video ever! Recommended.” – Bruce Douglas, High-Def Digest

“If you don’t know Walter Hill this may be a great entry point into his work as it’s everything that fans of Hill have come to expect from him: great action, great characters, great story and above all else great direction.  Shout Factory has done right by this forgotten classic.  Do right by them (and Hill) and buy it.  Highest possible recommendations!!!” – Adam Kautzer, Film Dispenser

“Shout Select delivers a marvelous transfer and well-amplified lossless audio. Shout has recycled all of Universal's standard bonus features and added five news ones. The interview with Bob Gale covers a lot of ground in a relatively short period and is arguably the best extra on the disc…this is a worthy "Collector's Edition" and comes VERY HIGHLY RECOMMENDED.” – Dr. Stephen Larson, Blu-ray.com