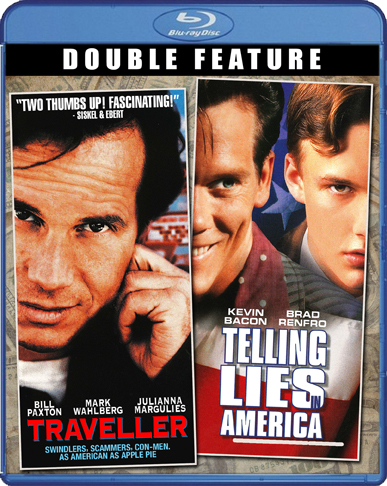 Bill Paxton (Twister, Apollo 13) gives a career-topping performance as Bokky, a beguiling con artist whose skill with a scam is legendary among the Travellers - modern-day gypsies who make a good living swindling unsuspecting victims throughout the rural South. Bokky's solo routine is interrupted by the arrival of Pat (Mark Wahlberg - The Fighter, Contraband), a young drifter from "the outside" who has returned to claim his birthright as a clan member. Although Bokky is nearly redeemed when he meets up with Jean (Julianna Margulies - The Good Wife, ER), both men fall under the spell of the outlaw gypsy Double D (James Gammon) and are caught up in a brilliant but deadly new scam that will put their loyalties - and their lives - to the ultimate test.

In Telling Lies in America, Karchy Jonas (Brad Renfro - Bully) was born in Hungary and immigrated to Cleveland in the early 1960s, where he felt adrift in a strange sea of American culture. Jonas tries to fit in at his Catholic high school but finds himself a laughingstock. At home, his stern father insists that he adhere to traditional Hungarian ways. Karchy's only respite is the rock 'n' roll he adores, and he vows to win the High School Hall of Fame contest so he can impress his classmate Diney (Calista Flockhart). Eventually he does win, and in the process befriends Billy (Kevin Bacon), the DJ who hosted the contest, who introduces Karchy to life's wild side. But despite the fun, there is much the naive youth is destined to learn the hard way about his new buddy Billy.