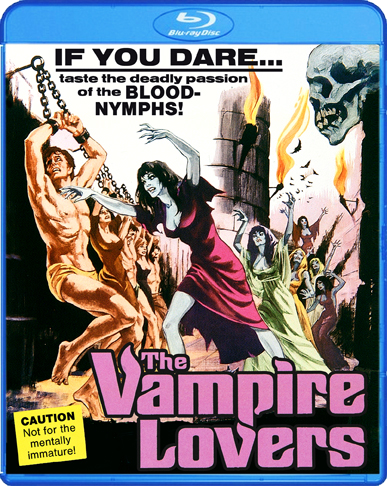 CAUTION: Not for the mentally immature!

A female vampire with lesbian tendencies ravages the young girls and townsfolk of a peaceful hamlet in eighteenth century Europe who, years earlier, killed off her fellow vampires. A rousing hunt for the vampiress ensues as a group of men follow her bloody trail of terror through the countryside. Adapted from J. Sheridan LeFanu's novella "Carmilla," The Vampire Lovers stars Ingrid Pitt, George Cole and Peter Cushing.

"I recommend this movie for all fans of vampires and of course, fans of Hammer Productions. I'm giving it 5 stars because of this release is very good. You get a commentary track with the major players along with the very good movie. I'm giving the movie 4 1/2 stars and the Blu-ray print 4 stars and I'm bumping it up to 5 stars because of the commentary track, excellent extra's and importantly, the price. This release is priced at $9.99 for the multi-format version at the time of this review in January, 2018." -Amazon

"The Vampire Lovers isn’t just simply sexy, though. It is very rich in atmosphere. The sets are amazing looking and the costumes are very sumptuous. Even the score provided by Harry Robinson exudes both a seductive and terrifying feel, not unlike our beautiful villainess." -Horror Freak News