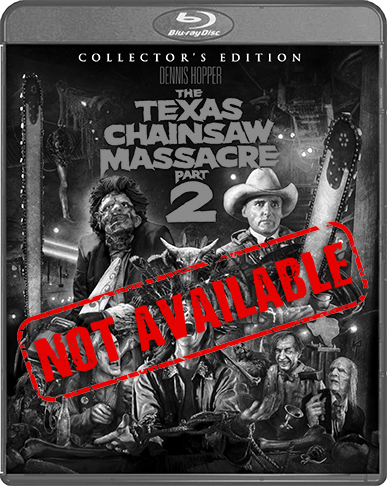 Product Note: As of August 6, 2020, this title is OUT OF PRINT. The limited edition poster is sold out.

THE BUZZZ IS BACK!

In 1974, horror fans rejoiced upon the release of Tobe Hooper's masterpiece, The Texas Chain Saw Massacre. The movie raised the stakes of in-your-face filmmaking and changed the face of horror. Twelve years later, Hooper and the Sawyer clan are back with this deviously entertaining sequel, starring Dennis Hopper in one of the most deliciously crazed performances of his career.

For a decade, Texas Ranger Lefty Enright (Hopper) has sought to avenge the brutal murder of his kin by the cannibalistic Sawyer family – Leatherface, Chop-Top, The Cook and Grandpa. With the help of a radio DJ (Caroline Williams), who's also bent on putting an end to the terror, Lefty finds his way to the Sawyers' underground slaughter shop, where a battle of epic proportions will soon rage... and the line between good and evil gets chopped to bits!

“...it looks amazing and gives fans everything they could possibly want from a release. One of the most excessive splatter films of the ’80s, it’s nice to see it given care and respect like few other companies would give it. – Nerdist

“Scream Factory has an early candidate for Blu-ray Release of the Year withThe Texas Chainsaw Massacre 2. There are hours and hours of bonus goodies in this 2-disc set.” - The Aisle Seat

“I feel I simply must stress how terrific the movie looks on this new release - the vivid colors have never looked better, and the enhanced detail allows you to fully appreciate the (in all honesty) Oscar-worthy production design.” – Birth. Movies. Death.