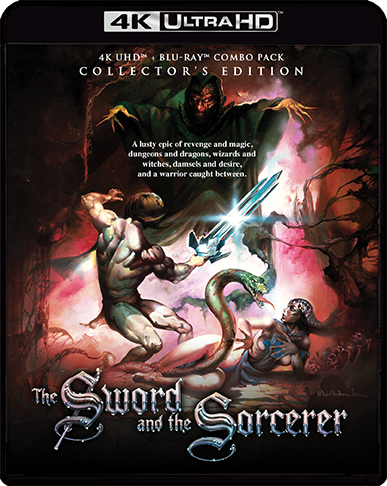 The Sword And The Sorcerer [Collector's Edition]

Product Note: The limited edition poster has SOLD OUT as of March 18, 2022.

"In many ways better than Conan The Barbarian and Excalibur." – The Psychotronic Encyclopedia of Film

Meet Talon, a daring mercenary who conquers castles and dungeons alike with his lethal three-bladed sword. But when Talon learns that he is the prince of a kingdom controlled by an evil sorcerer, he is thrust into the wildest fight of his life. Can Talon rescue the beautiful princess and slay the warlock, or will he fall prey to the black magic of medieval mayhem? Lee Horsley (Matt Houston, The Hateful Eight), Kathleen Beller (Dynasty), Simon MacCorkindale (Jaws 3-D) and Richard Moll (House) star in this action-packed adventure saga, filled with brutal battles, plucky maidens, savage monsters and more!

The Sword and the Sorcerer