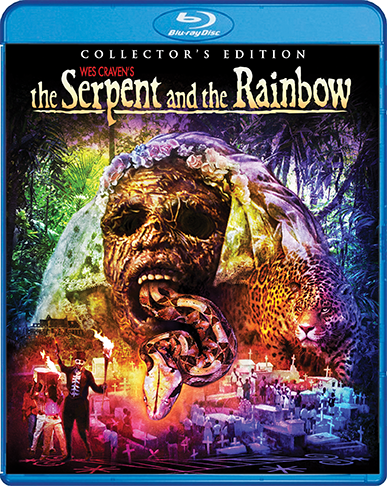 Wes Craven (A Nightmare On Elm Street, Scream) directs this terrifying story of one man's nightmarish journey into the blood-curdling, deadly world of voodoo.

A Harvard anthropologist (Bill Pullman, Lake Placid, Independence Day) is sent to Haiti to retrieve a strange powder that is said to have the power to bring human beings back from the dead. In his quest to find the miracle drug, the cynical scientist enters the rarely seen netherworld of walking zombies, blood rites and ancient curses.

Based on the true-to-life experiences of Wade Davis, starring Cathy Tyson (Mona Lisa), Zakes Mokae (Dust Devil, Waterworld), Paul Winfield (The Terminator, Damnation Alley) and Michael Gough (Horror of Dracula, Batman), and filmed on location in Haiti, it's a frightening excursion into black magic and the supernatural!

"While The Serpent and the Rainbow does not unspool as quite the film director Wes Craven intended to make, it is still an involving project from the late horror icon…Shout! Factory's Collector's Edition Blu-ray offers excellent picture and sound, as well as some worthwhile, newly created bonus items. Highly Recommended." – William Harrison, DVD Talk

"The Serpent and the Rainbow ranks as one of Wes Craven's more memorable films, taking the zombie mythology back to its original roots in mysticism, folklore, and the Voodoo religion. Starring Bill Pullman as a highly skeptical ethnobotanist and anthropologist, the production is a different type of Craven project, focused on a fresh spin of a familiar subgenre as an atmospheric thriller that's highly entertaining. The Blu-ray from Scream Factory arrives with strong picture quality and an excellent audio presentation. Recommended." - M. Enois Duarte, High Def Digest

"The Serpent and the Rainbow arrives on Blu-ray with a very satisfying picture quality that is sure to make fans smile. This new transfer easily outpaces the previous DVD release and adds much in the way of color strength and overall clarity. The movie looks beautiful and there is not much to complain about given that any shortcomings likely stem from the source materials." – Zigzag, Horror Talk

"Scream Factory has added something really special to a movie that will not only allow old school horror fans to revisit and enjoy but a new generation of horror fans will get to experience this movie for the very first time and in high-def. This will be Scream Factory’s last Wes Craven movie which makes it even more special and they went all out for this Collector’s Edition Blu-ray. Everything about this release is absolutely stunning, from the all-new artwork to the impressive HD transfer from the inter-positive film element. Job well done!" – Alien Bee