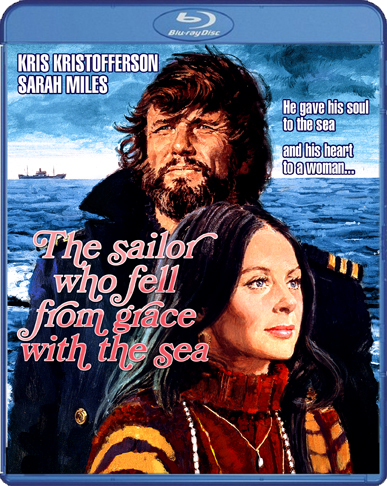 The Sailor Who Fell From Grace With The Sea

He gave his soul to the sea and his heart to a woman. Their love will arouse you. The story will disturb you. The ending will startle you.

Obsession and fate collide in one of the most controversial and provocative films ever made. English widow Anne Osborne (Sarah Miles, Ryan's Daughter) lives by the sea with her young son, Jonathan. The arrival of a rugged American sailor, Jim (Trouble In Mind's Kris Kristofferson), brings Anne the joy and sensual fulfillment she thought had gone forever, but her son is disturbed by this new intruder and joins a perverse group of fellow students led by the charismatic Chief. With its disturbing shock ending and frank love scenes, this stylish adaptation of the novel by legendary writer Yukio Mishima has become a timeless classic, with sharp direction by Lewis John Carlino (The Great Santini), powerhouse performances, exquisite cinematography by the legendary Douglas Slocombe (Raiders Of The Lost Ark) and a haunting score by Johnny Mandel (M*A*S*H). Beautiful, eerie and erotic, this spellbinder has been restored in high definition from archival elements to its original widescreen glory.

The Sailor Who Fell From Grace With The Sea