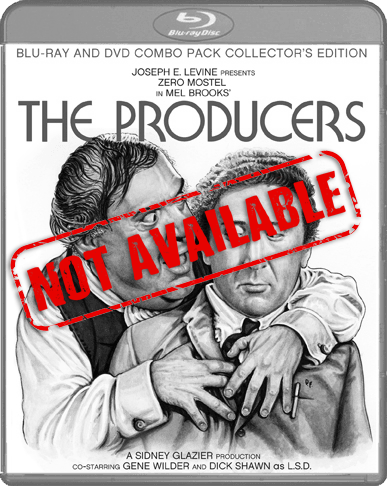 The Producers [Collector's Edition] (SOLD OUT)

“One of the funniest movies ever made.” – Roger Ebert

From the endlessly funny mind of filmmaker Mel Brooks (Blazing Saddles, Young Frankenstein) comes this Oscar®-winning explosion of pure comic lunacy about low-rent Broadway producer Max Bialystock (Zero Mostel) and his high-strung accountant Leo Bloom (Gene Wilder). They discover that, with the help of a few gullible investors, they can make more money on a flop than on a hit. So armed with the worst show ever written – “Springtime For Hitler” – and an equally horrific cast, this double-dealing duo is banking on disaster. But when their sure-to-offend musical becomes a surprise smash hit, they find themselves in the middle of a Broadway blitzkrieg!