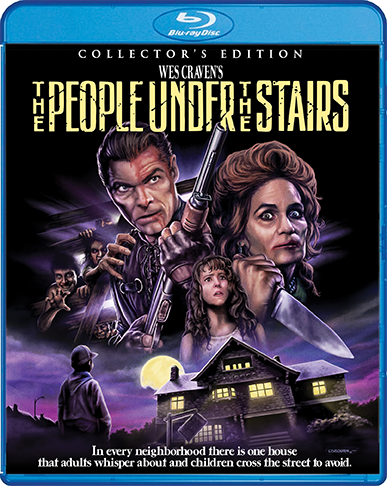 Wes Craven, the director of A Nightmare on Elm Street and Scream, takes you on a terrifying journey inside the most demented house on the street. Trapped inside a fortified home owned by a mysterious couple, a young boy is suddenly thrust into a nightmare.

The boy quickly learns the true nature of the house's homicidal inhabitants and the secret creatures hidden deep within the house.

“The People Under the Stairs remains one of Craven's most timely films: the recent events in Ferguson and Baltimore stress the same kind of unrest and cultural divide that fractured this country over twenty years ago.” — Blu-ray.com

“Wes Craven’s The People Under The Stairs is a timeless American nightmare” — The A.V. Club

“Normally I'd advise first-time viewers to try before they buy, but the film's gonzo attitude and this Blu-ray's fundamental strengths work together to nudge it over the top. Recommended.” — DVD Talk