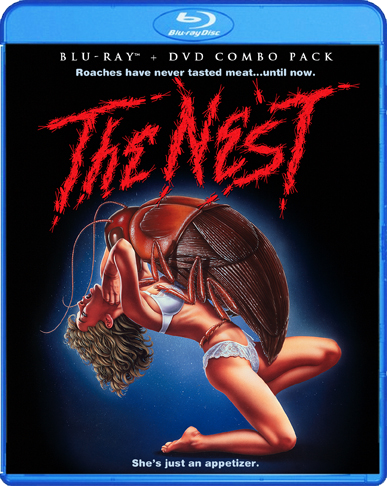 The quiet town of North Port is being overrun by cockroaches! Sheriff Tarbell (Franc Luz) believes that genetic experiments being conducted by the INTEC Corporation are the cause. Confronted with a potential disaster, Mayor Johnson (Robert Lansing) calls for help.

When Dr. Hubbard (Terri Treas) from INTEC arrives, she realizes that an innocent experiment has gone terribly wrong. Ordinary cockroaches are turning into creatures with a taste for blood. Worse, the roaches are genetically mutating... literally becoming whatever they eat!

"From the opening scene of The Nest, which combines something I really love, coffee, with something I abhor, a cockroach swimming in it, you pretty much know what you are in for, should also be able to measure your tolerance for this type of nature run amok flick. If you can take the high amount of roaches featured front and center in this film, then dive right in, as you’ll be in for a real fun, low-budget gem that is ripe for rediscovery." -Horror Freak News

"What makes The Nest particular fun is that you actually care about the characters. You become somewhat invested in the love between Elizabeth and Richard, and for a movie like this, that’s a pleasant surprise. Also, there are some awesome supporting characters, the best of which is the town exterminator who provides some comic relief occasionally." -Horror News