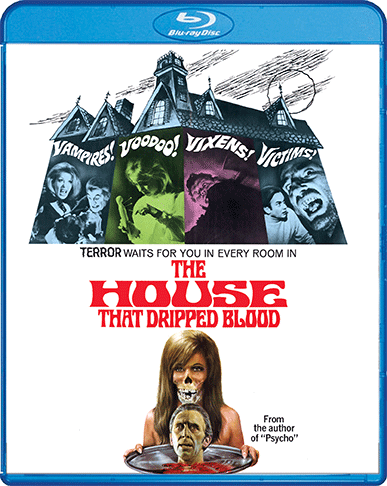 "This Amicus production is one of the very best..." – The Bloody Pit of Horror

"A real treat" – The Terror Trap

A Scotland Yard inspector's search for a missing film star leads him to a haunted house. The house sets the framework for four separate tales of terror written by the author of Psycho, Robert Bloch, and starring horror icons Peter Cushing, Christopher Lee and Ingrid Pitt. All four stories center on the mysterious fates of tenants who have leased the mansion over the years.

“I am a little surprised this wasn’t labeled as a collector’s edition release because it’s full of special features!...This is a must own for your collection, this comes highly recommended from me!” – Wayne Wright, Horror Headquarters

“I really enjoyed the special features, and found myself wanting more because these films (again) are just so much fun. The audio commentary by film historian and author Troy Howarth is a mini film class in itself…The House That Dripped Blood has my highest recommendation if you're a fan of these great old films, Hammer, or Amicus.” – Michele "Izzy" Galgana, Screen Anarchy

“A long time coming for Amicus fans who have seen their fair share of Blu-ray releases of the production company’s films as of late from different labels, Scream Factory rescues The House That Dripped Blood with a fine transfer and nice bevy extras. Highly recommended.” – Tim Salmons, The Digital Bits

“The House That Dripped Blood is one of the better productions from the Amicus cannon and boasts redeeming qualities in all four of its episodes. Shout! Factory delivers an outstanding transfer and a remastered mono track that must sound as good as it did in cinemas back in 1971. Shout! has retained the extras from the European DVDs and recorded a new interview with the film's second assistant director….The crown jewel on Shout!'s package is the audio commentary by Troy Howarth, which is essential listening. This is a MUST BUY for fans of Cushing and Lee and the release comes VERY HIGHLY RECOMMENDED.” – Dr. Stephen Larson, Blu-ray.com

“Normally, I find four stories to be one too many with an anthology film containing a wraparound, but The House That Dripped Blood is an exception. They all have their strengths and if you’re into classic horror of this era, its a load of fun with vintage thrills. Scream Factory has put together a really wonderful looking presentation to go along with some suitable extras.” – Brandon Peters, Why So Blu