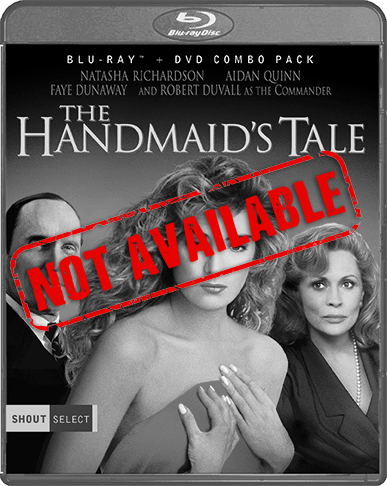 The Handmaid's Tale (SOLD OUT)

With a "cool eroticism, intelligence and intensity" (Playboy), this eerie futuristic thriller, based on Margaret Atwood's controversial and critically acclaimed best-selling novel, is filled with "large themes and deep thoughts" (Roger Ebert). Boasting a phenomenal cast including Natasha Richardson (Nell) and Oscar® winners Faye Dunaway (Network) and Robert Duvall (Tender Mercies), this film "dazzles with its ingenuity and shocks with its outrageousness" (WNCN Radio)!

In the not-so-distant future, strong-willed and beautiful Kate (Richardson) possesses a precious commodity that most women have lost and most men want to control... fertility. In a brain-washing bootcamp that turns fertile women into surrogate mothers for social-elite men and their infertile wives, Kate thinks she's made out well when she's assigned to an eminent party leader (Duvall). But when she learns that he's sterile, she's faced with the impossible choice: produce him an heir or die!

“Far from feeling dated, this underrated piece of speculative fiction is now more uncannily in-sync with the times than when it was originally released. Even when forced to compete for attention with the high-profile Hulu series that debuts shortly, I suspect this movie iteration of Margaret Atwood's story will entertain and provoke new viewers for years to come. Highly Recommended.” – Justin Remer, DVD Talk

“The Handmaid's Tale received predominantly mixed to unfavorable reviews during its theatrical span but I think it plays better on home video, especially since so many of its themes still resonate with us today. Shout Select delivers a rock solid transfer…” – Dr. Stephen Larson, Blu-ray.com