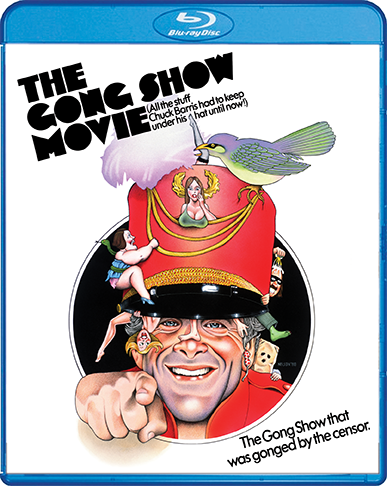 From the dangerous mind of Chuck Barris comes one of the most infamous motion pictures ever – The Gong Show Movie! Long absent from home video formats, this one-of-a-kind cult film has at last taken its act to Blu-ray. Inspired by the TV talent(less) show, The Gong Show Movie presents a week in the life of beleaguered game show producer and Gong Show host Chuck Barris (played by Mr. Barris himself, in a masterstroke of casting.) Between a ratings-obsessed executive, out-of-control contestants and judges, and a seemingly endless string of auditions and encounters with "fans," Chuck's got his hands full… which leaves him no room to keep a grip on his own sanity. Can he get it together before the gong is struck on both his private life and his career?

Co-written by Barris and underground film legend Robert Downey Sr. (Putney Swope), The Gong Show Movie is by turns anarchic and melancholy, a wild mood swing of cinema. It's time to fire up Gene Gene the Blu-ray Machine, learn to stop worrying, and love the Gong. This highly entertaining film includes appearances by Gong Show favorites, moments that got gonged by the censors, and more stuff!