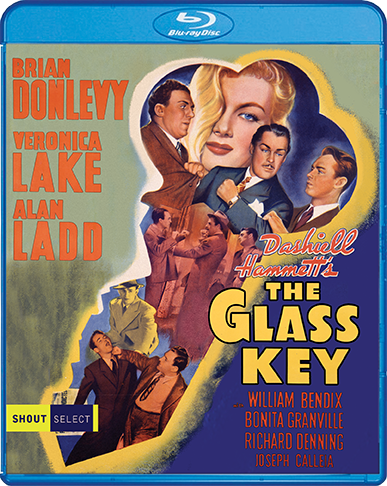 A film noir classic featuring the stars of This Gun For Hire!

This engrossing and intricate murder mystery, based on Dashiell Hammett's best-selling novel, stars Brian Donlevy, Alan Ladd and Veronica Lake. Ed Beaumont (Ladd) is the loyal right-hand man of Paul Madvig (Donlevy), a corrupt politician who is accused of murder. Hunting down the real killer, Beaumont must endure a brutal beating from gangsters, the annoying hindrance of the police and the beguiling advances of his boss's fiancée, socialite Janet Henry (Lake).

"The Glass Key stands out as not only one of the best pairings of both Alan Ladd and Veronica Lake, but also a key movie (pun intended) in the development in the film noir genre. Shout Factory, through the Shout Select label, has done a good job in bringing out the movie on Blu-ray," T1G3R5FAN, Hometheaterforum.com

"The Glass Key makes a good entry in Shout Select's series, especially for North American consumers who didn't pick up Arrow Academy's disc two years ago. The Arrow has more extras, including a visual essay on the film and a radio dramatization," Stephen Larson, Bluray.com