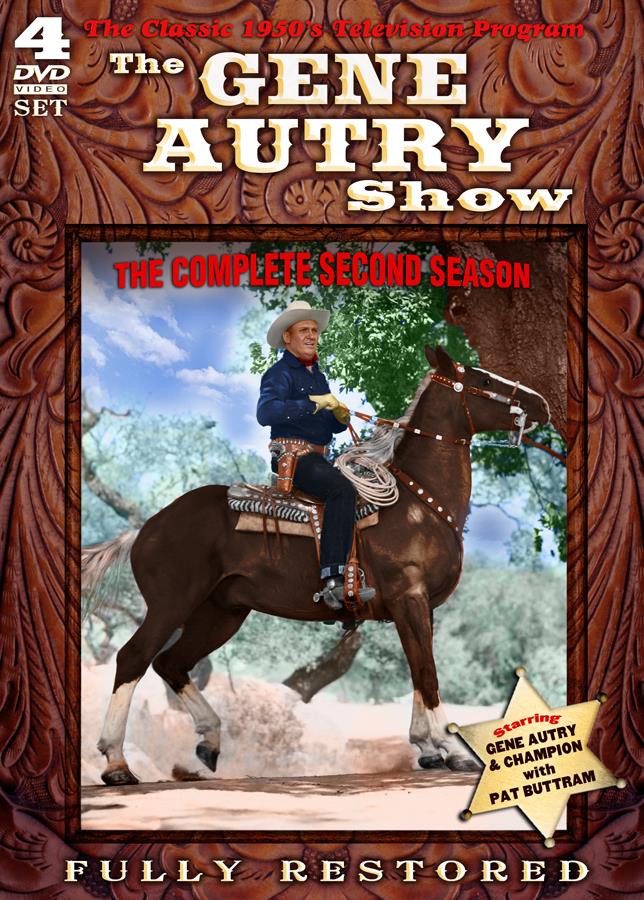 Gene Autry is the only entertainer with all five stars on Hollywood’s Walk of Fame, one each for Radio, Recording, Motion Pictures, Television and Live Performance. By the middle of the 20th Century, Autry was a box office smash with his musical B Westerns, touring with his rodeo across the United States and the British Isles, and had several gold records including his Christmas classic Rudolph, the Red-Nosed Reindeer. Autry’s highly anticipated television debut on CBS-TV, July 23, 1950, placed him immediately in the ranks of television’s topmost attractions. What’s more, with TV, America’s beloved cowboy star added still another to his long list of illustrious “firsts.” He became the first topflight motion picture star to make films especially for the Golden Age of Television.

The Gene Autry Show, sponsored by Wrigley's Doublemint Chewing Gum, originally aired on CBS from 1950 to 1955. The program follows the adventures of singing cowboy Gene Autry, his Wonder Horse Champion, and his sidekick Pat Buttram, who travel the Southwest to maintain law and order. The series is a collection of stand-alone half-hour episodes: sometimes Gene and Pat know each other and sometimes they do not; some shows are set in the past and some are in the near present of the early 1950s. Each unique show has Gene’s trademark mixture of action, comedy, and singing. It also features a wide range of guests, including Gail Davis, Alan Hale Jr., Harry Lauter, Donna Martell, Denver Pyle, Elaine Riley, William Fawcett, Gloria Winter, and Dick Jones.

Now, for the first time on DVD, the complete Season Two of Gene Autry’s landmark television series The Gene Autry Show is brought home in these fully restored and uncut episodes from Autry’s personal film and television archive. See for yourself why the hard riding, furious fighting, and smooth singing Gene Autry is considered America’s favorite cowboy.