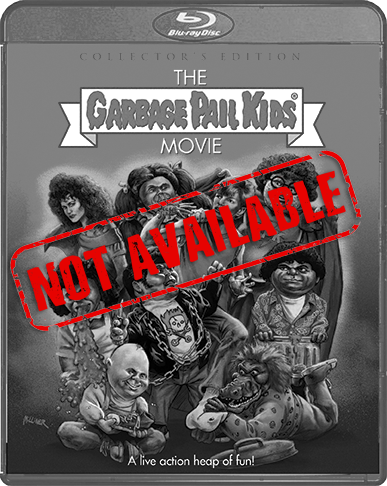 It Doesn't Get Any Grosser Than This… Especially in High-Definition!

Your favorite grime bandits come to life with all the farts, snot and vomit you can take in this hilarious film full of "gross-out humor" (The New York Times). Based on the wildly popular and irreverent trading cards, The Garbage Pail Kids® Movie stars Mackenzie Astin (Iron Will, Wyatt Earp) as a perfectly nice teenager who discovers the Kids...to his great disgust!

When Dodger (Astin) accidentally releases the Kids from their magical trash can prison, all smell breaks loose. Despite their offensive personal habits – and attitude problems – Dodger soon becomes fond of the Kids. But when Messy Tessie, Foul Phil, Valerie Vomit and the whole misfit crew join his fight against thuggish bullies, their efforts just might land them behind bars at the State Home for the Ugly!

"When a movie this universally loathed gets a Collector’s Edition treatment with tons of bonus features, including cast interviews, there is no way to pass on such a release. Having watched the film for the first time in over 25 years, it was even worse than I remembered, but getting the chance to listen to interviews from star Mackenzie Astin and others makes this release totally worth owning." – Marc Ferman, Popcorn Nights

"The Blu-ray from Scream Factory arrives with a surprisingly good audio and video presentation that will surely have fans scrambling for the nearest garbage pail. With a nice assortment of supplements, cult enthusiasts should be honored to have this stinky pile of a hot mess in their collection." - M. Enois Duarte, High Def Digest

"Bottom line is, The Garbage Pail Kids Movie is so bad it’s good and what Scream Factory has done is give this obscure fantasy comedy a second chance and deservingly so. Sure, it’s been called one of the worst movies ever made but it’s also a fun, bizarre and really strange movie that’s geared towards a younger audience (not too young!) and truly is grossly entertaining – in more ways than one." – Alien Bee