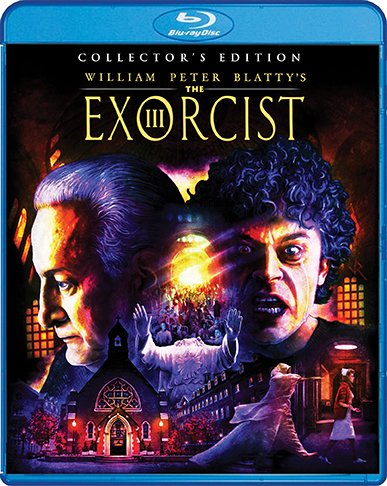 THE EXORCIST III is author/filmmaker William Peter Blatty’s personal vision of what followed after THE EXORCIST. Like the original, THE EXORCIST III combines elements of a detective story, a theological puzzle, and an unforgettable study in terror.

"It’s as much a mystery thriller as a horror flick – particularly in Scream Factory’s newly restored director’s cut, which removes many of the direct echoes demanded by the studio and restores a series of lengthy dialogue scenes that are closer to Silence of the Lambs – though there are plenty of good scares in it, particularly a hospital sequence that’s a master class in sustained suspense." – Flavorwire

"Living in the shadow of The Exorcist is tricky business, but William Peter Blatty's The Exorcist III proves an excellent sequel that stands on its own merits. Intriguing and often frightening, the film benefits from excellent performances and a compelling story. Shout Factory's new 'Collector's Edition' Blu-ray offers excellent picture and sound, a host of newly created supplements, and the much-anticipated director's cut of the film, Legion. Very Highly Recommended." – DVD Talk

"Shout! has pulled out all the stops and resurrected something that most people wrote off long ago as never coming out for legit release. The massive supplements and improved PQ from the previous Blu-ray alone make this an easy purchase, but finally having close to Blatty’s cut is the real selling point, regardless of how you feel about it." – Cut Print Film

"Scream Factory’s new Collector’s Edition features a brand new 2K scan of the film’s interpositive element and the results are spectacular. This is, bar none, the best the film has ever looked on home video. It’s a beautiful and extremely organic-looking presentation, with more clarity than ever before." – The Digital Bits