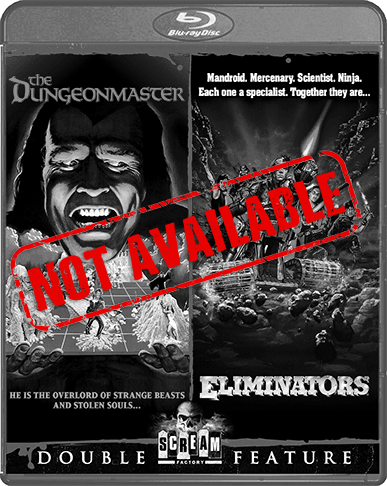 A Double Dose Of Science-Fiction Fun!

Paul, a young computer ace, is forced to pit his physical and mental skills against unimaginable odds when a hulking wizard looking for formidable opponents picks Paul as his next challenger. Paul faces a series of seven spectacular and death-defying challenges and must survive not only to save his life but that of his girlfriend's too! Jeffrey Byron (Metalstorm: The Destruction Of Jared-Syn) and Richard Moll (Night Court) star in this eye-popping thriller featuring an appearance by W.A.S.P.!

This version of THE DUNGEONMASTER is Unrated and different from the PG-13 version shown theatrically. It includes an additional scene with some nudity. Parental discretion is advised.

A mandroid – part man and part machine – seeks revenge on the evil scientist who created him. Enlisting the help of a beautiful woman and a mysterious ninja, he pursues the scientist in hopes of stopping him before he can further harm humanity. Andrew Prine (The Town That Dreaded Sundown) and Denise Crosby (Star Trek: The Next Generation) star.