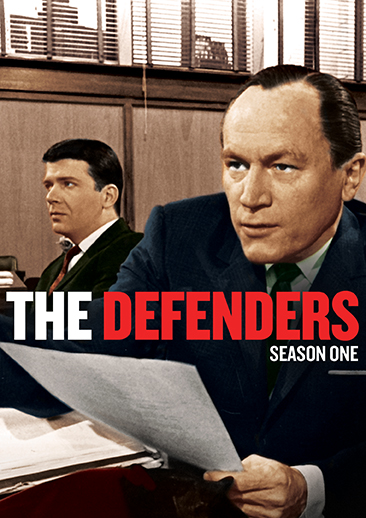 On the path to justice, there shall stand The Defenders.

One of television's most respected dramas finally arrives on DVD with The Defenders: Season One. E.G. Marshall and Robert Reed star as Lawrence and Kenneth Preston, a father-and-son team of defense attorneys specializing in complex and challenging cases, many of which explored real-world concerns which still resonate with audiences today.

Created by Reginald Rose (Twelve Angry Men), The Defenders was an Emmy® award-winning series many times over, with a well-earned reputation as one of the most socially conscious series ever to air on television.

An unquestionable champion of quality television, The Defenders: Season One is at long last in session.

"This excellent legal drama was the 60’s alternative to the slick Perry Mason as it observed a father and son team of defense attorneys who often clashed over their socially relevant cases. Well conceived by Reginald Rose (Twelve Angry Men). This marks the first time this series has been available and the extras, from the good folks at Shout Factory, are solid." – Floyd County Times

"The Defenders is one of the most important television series to air on an American broadcast network. It won more than a dozen Emmys, including three consecutive trophies for best drama (a record not broken for another two decades, by Hill Street Blues). At a moment when the dramatic anthology was on its deathbed, and ongoing series were often (fairly or not) thought of as meritless escapism (Newton Minow’s “vast wasteland” speech depends on this context), The Defenders created the template for what we now think of as quality television." – The Classic TV History Blog

"'The Defenders' offered viewers an early glimpse of what risk-taking, quality TV could deliver." – The Los Angeles Times

"One of the best legal dramas ever broadcast finally arrives on DVD. New viewers might be struck by how the show is both boldly progressive and oddly old-fashioned at the exact same time, but the strength of the writing, the directing, and the performances make it irresistible even so. Highly Recommended." – DVD Talk

“…I cannot stress enough what a sure thing this show is to anyone who appreciates good writing, good acting, ambitious stories, and entertainment that actually expects viewers to have an IQ above double-digits. Give The Defenders a try. You won't be disappointed.” – David Hofstede, Comfort TV