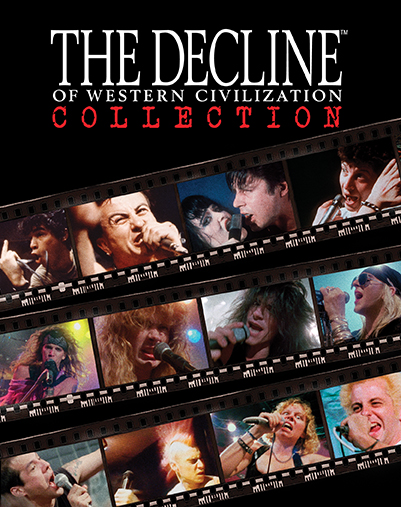 The Decline Of Western Civilization Collection

Penelope Spheeris' The Decline Of Western Civilization was perceived as shocking and outrageous at the time of its original release in 1981 and its two follow-up films were no less extraordinary and revealing. Today, museums and educational institutions around the world present them as a historically significant works of art. Featuring some of the most influential and innovative musicians and groups of all time – Germs, Black Flag, X, Fear, Circle Jerks, Alice Cooper and Ozzy Osbourne, these riveting, unflinching and hard-core films adeptly captured the spirit of a major cultural phenomenon.

Now for the first time, all three films are available in one deluxe box set. And while all three films have been restored in high definition, they are in keeping with the feel of the rebellious times in which they were shot. Here's an immersive tour of in-your-face filmmaking and music.

“Shout! Factory have done a pretty fantastic job bringing The Decline Of Western Civilization Collection to Blu-ray in truly deluxe style. The movies look and sound as good as you'd want them to and the set is jam-packed with extras that are both interesting and often times very entertaining as well. The films themselves hold up well as cultural artifacts of their respective times. Anyone with an interest in punk, metal or just subcultures in general should seriously appreciate this boxed set and all that it contains.” – DVD Talk

“Even decades later, these films have the power to connect with audiences like a fist to the gut.” – The Globe and Mail

“Shout! Factory has a reputation for putting out comprehensive and well thought out packages, and this Decline of Western Civilization box set is no exception. Each movie got a shiny new 2K upgrade, so they look as good as these movies will ever look. They’re not particularly high def; then again, the grittiness and grime are a part of the overall aesthetic, so you wouldn’t want them to get too dressed up…. All in all, this is a fantastic box set, well worth picking up if you’re a devotee of the films and want to really dig into them, or if you’re just a fan of left-of-center music documentaries.” – PopMatters.com

“Shout!’s surprise Blu-ray box set is an eye-popping upgrade over the VHS rips most fans have seen. It’s a captivating chronicle of the early years of one of the last century’s most impactful cultural and musical movements, shot from the very center of one its strongest scenes. With first-rate performance footage and brutally candid interview subjects—including a sad moment with the Germs’ Darby Crash, who committed suicide before the film’s release—it’s a documentary no one with an interest in music history should miss.” – Under The Radar Magazine

The Decline Of Western Civilization Collection