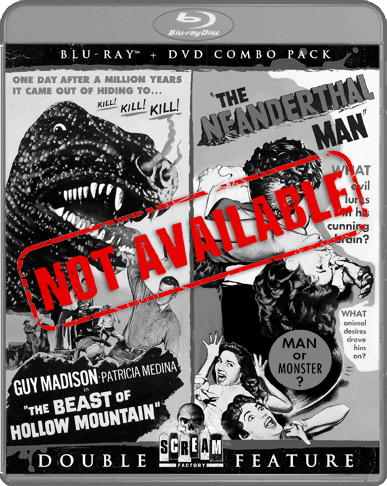 Based on an idea by the legendary special effects wizard Willis O’Brien (King Kong, Son Of Kong, The Lost World), The Beast Of Hollow Mountain is a classic creature feature. An American rancher living in Mexico is staying near Hollow Mountain, an impenetrable swamp where, stories have it, dwells a living prehistoric Tyrannosaurus Rex!

A mad scientist uses his new serum on his housekeeper, turning her into an ape-woman. Like most crazed scientists, he then tries the serum on himself, creating…The Neanderthal Man! Robert Shayne (How To Make A Monster) and Beverly Garland (It Conquered The World, The Alligator People) star in this harrowing creature feature.

"Scream Factory’s latest double feature treat is an unexpected but very welcomed duo of very different prehistoric monster-themed B movies from the 1950s. Both films were originally released through United Artists and come courtesy of the MGM vaults, remastered in HD and looking exceptional." -DVD Drive in

Beast of Hollow Mountain: "Guy is handsome and heroic. Patricia is stunningly beautiful. The T-Rex is scary, but not too much, so little kids will be okay with it. What more could you want?" -Amazon

Beast of Hollow Mountain: "I'm so happy that a decent 2.35:1 release of this film has finally been put out on DVD. (I still have my previous, frequently-viewed copy on Laserdisc). Also, as an added treat, we get NEANDERTHAL"-Amazon

The Beast Of Hollow Mountain / The Neanderthal Man [Double Feature]