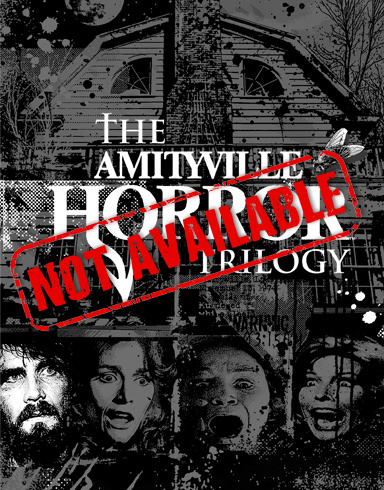 The Amityville Horror Trilogy (SOLD OUT)

Blood drips from the walls. A terrifying chill permeates through the rooms. Menacing eyes glow from the upstairs window and inside this charming Long Island home, an unspeakable evil lurks the halls, waiting to torment all who dare enter. Experience the ultimate in haunted house films…and delve deeper into the history of the films with vintage special features and all-new special features created for this deluxe collector’s set.

Experience AMITYVILLE 3-D like never before on home video ….in Blu-ray 3-D!

"The three films vary in quality (the second is my personal favorite, I’m fine if I never see III ever again)) but you can’t argue that having an Amityville box set on your shelf does not kick ass." -Bloody Disgusting

"Brolin delivers a convincingly frightening performance as a man slowly ripping apart at the seams. Then there's the haunting, almost iconic music of Lalo Schifrin, which succeeds at giving me goose bumps better than the movie" -High Def Digest

"The Amityville Horror, based on the bestselling novel by Jay Anson, benefitted enormously from its highly debated true-life roots, which concerned the experiences of the Lutz family when they moved into the scenic titular New York neighborhood the year after a grisly mass murder took place in their new house. The marketing for the film was so effective that otherwise reasonable baby boomers are still inclined to speak of that movie with a slightly creeped-out ambivalence." -Blu-Ray Review