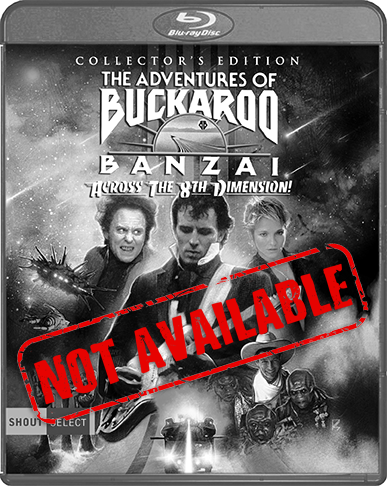 Product Notes: As of August 30, 2020, this title is OUT OF PRINT. The limited edition poster has SOLD OUT.

Expect the unexpected... he does.

Neurosurgeon. Physicist. Rock Star. Hero. Buckaroo Banzai (Peter Weller, RoboCop) is a true 80s renaissance man. With the help of his uniquely qualified team, The Hong Kong Cavaliers, Buckaroo is ready to save the world on a moment's notice. But after his successful test of the Oscillation Overthruster – a device that allows him to travel through solid matter – he unleashes the threat of "evil, pure and simple from the 8th Dimension"... the alien Red Lectroids.

Led by the deranged dictator Lord John Whorfin (John Lithgow), the Lectroids steal the Overthruster with the intent of using it to return to their home of Planet 10 "real soon!" But no matter where you go, there Buckaroo Banzai is... ready to battle an interdimensional menace that could spell doom for the human race.

Featuring Ellen Barkin, Jeff Goldblum, Christopher Lloyd, and Clancy Brown, The Adventures Of Buckaroo Banzai is a cleverly crazed cult classic as only the 80s could deliver.

“A testament to [Shout! Factory’s] high standards of quality” – Under the Radar Magazine

“Into the 8th Dimension’ is a superb in-depth piece that gets into almost picayune detail about everything from pre- production and casting to SFX and the film's release. Interviews abound in this well done documentary…Technical merits are strong, and at least for those with a skewed sense of humor, The Adventures of Buckaroo Banzai Across the 8th Dimension comes highly recommended.“ – Blu-ray.com

“The Blu-ray is a must have. With glorious looking video and a top-notch documentary, it certainly worth the purchase. And for everyone else, it’s a marvelous opportunity to discover a surprisingly funny and confident film.” – Bleeding Cool

“Shout’s new Blu-ray is absolutely a must-have addition to your movie library. Trust me, the new documentary and commentary are a real treat. Highly recommended!” – The Digital Bits

“Includes all the bells and whistles that members of its ever-widening cult could possibly ask for.” – RogerEbert.com

The Adventures Of Buckaroo Banzai Across The 8th Dimension [Collector's Edition]