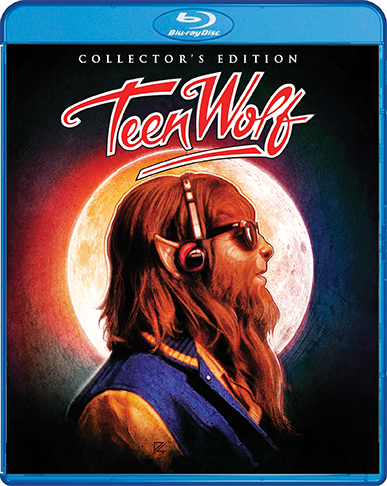 Product Note: The limited edition poster has SOLD OUT as of February 13, 2019.

He Always Wanted To Be Special … But He Never Expected This!

Like all teenagers, Scott Howard (Michael J. Fox, the Back To The Future trilogy) is going through some … changes. But unlike the rest of the students at Beacontown High School, Scott's changes include long hair that covers his entire body, claw-like fingernails, fangs, a heightened sense of smell, superhuman strength and the extraordinary ability to … play basketball? And that's just the beginning.

Naturally, these uncanny new features turn this lovable loser into the most popular kid in school. But by embracing his newly minted popularity, has the Teen Wolf lost sight of what it truly means to be Scott Howard?

“Teen Wolf is a good solid '80s teen comedy that has been given a substantial upgrade by Shout! Factory. The new transfer looks sparkling and clean, easily eclipsing MGM's dated transfer. The uncompressed stereo also demonstrates noticeable improvements over the MGM mono. Shout!'s 143-minute documentary is by far the most in-depth piece produced about Teen Wolf. Owners of the MGM BD will want to replace their no-frills disc with this Collector's Edition. RECOMMENDED to genre aficionados and fans of Michael J. Fox.” – Dr. Stephen Larson, Blu-ray.com

“I love this movie, and I’m beyond thrilled with Scream Factory’s Collector’s Edition Blu-ray – a definitive release of a classic ’80s…If you’re a fan of this kitschy werewolf flick (and how could you not be?) then this is a must-own release.” – Adam Frazier, Geeks of Doom

“Teen Wolf is everything that's great about ‘80s movies--a wonderfully uncomplicated bit of fun with a cast of likeable characters that's powered by obvious heart and an excellent soundtrack. Lessons are learned, laughs are had and the good guys come out on top, with the effortlessly-charming Fox leading the way, backed by a top-notch crew of supporting actors. Scream Factory has done a great job giving this underrated film a great presentation, and paired it with the kind of comprehensive, informative bonus content any fan would hope for.” – Francis Rizzo III, DVD Talk

“Scream Factory has given this a new transfer from the Interpositive, and it looks substantially better than the MGM Blu-ray released a few years back. Strangely enough, the DTS-HD MA track is better as well (usually it’s a direct port), and the new 2.5 hour documentary is fascinating to watch.” – Michael Scott, AV Nirvana