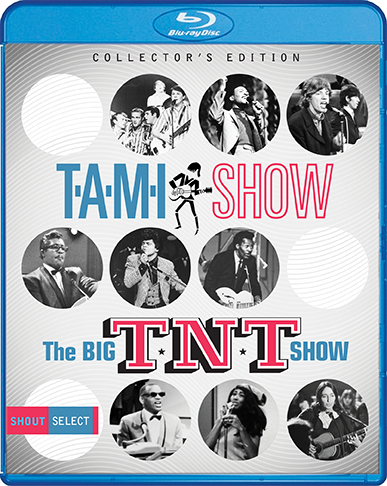 Product Note: The limited edition posters have SOLD OUT as of March 14, 2020.

The energy and excitement of some of music's greatest grooves!

The unmistakable sounds of a generation explode onto the screen with two of the greatest concert films of the rock n' roll revolution: T.A.M.I. Show and The Big T.N.T. Show. Filmed just eight months after The Beatles appeared on The Ed Sullivan Show, 1964's T.A.M.I. Show introduced rock 'n' soul youth culture to America as never before. Its 1966 follow-up The Big T.N.T. Show built on its predecessor's legacy as a showcase for the hottest hit-makers in music. Collectively, the two films are an incredible time capsule of American popular culture in the 1960s, and representative of the gold standard for concert films. This Collector's Edition is a double-barreled blast of the sights and the sounds of music's greatest eras, and features performances by future Rock and Roll Hall of Famers The Rolling Stones, James Brown, Chuck Berry, The Beach Boys, Marvin Gaye, Smokey Robinson And The Miracles, Bo Diddley, The Supremes, Ike and Tina Turner, The Ronettes, The Byrds, Ray Charles, and many other American and British Invasion hitmakers in their prime!

"These sensational mid-1960s all-star rock revues, preserved on video before a live audience, are packed with great acts, including the Beach Boys, Bo Diddley, Marvin Gaye, the Ronettes, the Supremes and James Brown, who delivers a remarkable performance." — The New York Times

“This double feature of The TAMI Show and The Big TNT Show make for a fun couple hours.  Lots of classic songs and great musicians during a lot of their powerhouse years of their youth… There are some solid extras here in what should be a collector’s item for music lovers.” – Brandon Peters, Why So Blu

“If you're someone who loves classic Rock 'n' Roll, Soul, and great tunes of the 60s, it doesn't get much better than 'T.A.M.I. Show' and 'The Big T.N.T. Show.' Combined, you get nearly three and a half hours of great music wrapped up in a neat little package… I'm calling 'T.A.M.I. Show / The Big T.N.T. Show' recommended.” – Matthew Hartman, High-Def Digest

“Shout Select 's two-disk Blu-ray release of T.A.M.I. Show / The Big T.N.T. Show is absolutely required viewing for any music fan. In fact it will be on the test, so start studying now. Full of iconic performances from a wide array of hot 1960s acts, these movies capture a moment in time like few other music documentaries. The two-disk Blu-ray of T.A.M.I. Show / The Big T.N.T. Show makes a great gift for the music lover in your life, but you need one as well, so buy two! DVD Talk Collector Series.” – Kurt Dahlke, DVD Talk

“…if you’re a music fan and haven’t seen The T.A.M.I. Show or The Big T.N.T. Show, you owe it to yourself to pick up this fine release and check them out.” – Tim Salmons, The Digital Bits

“The release of The TAMI Show/The Big TNT Show together and in this complete form is long overdue. If you're a '60s music fan, this belongs in your library. Period.” – Steve Marinucci, AXS