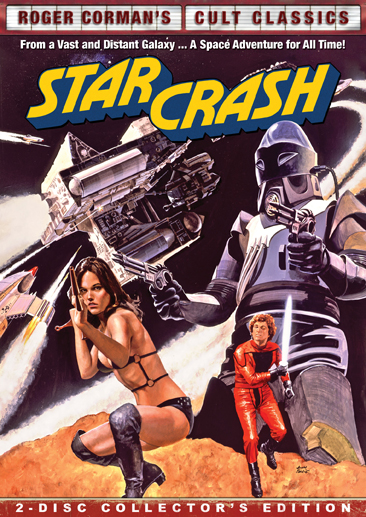 Prepare yourself for a vintage science fiction adventure film you will never forget, as the sultry Stella Star (Caroline Munro) and her alien sidekick Akton (Marjoe Gortner) team up with robot lawman Elle (Judd Hamilton) on a high adventure to save the universe. It's a cosmic mash-up of daring escapes, wild special effects, beautiful women in sexy space bikinis and nonstop action on a dozen alien worlds. Roger Corman presents the ultimate European space opera, a colorful and dazzling chase through the galaxy that will blast you through the blackness of a hundred million nights!

Kicked into hyperspace by a maelstrom of ingenious special effects and the talents of Academy Award®–winning composer John Barry, the film was a smash hit in 1979 when the wild and humorous sci-fi adventure hit theatres.

For over 30 years the film has gained a massive cult following, inspiring devoted legions of "Crashers," fan clubs and more. Now, for the first time on DVD, the film is presented in a deluxe two-disc special edition.