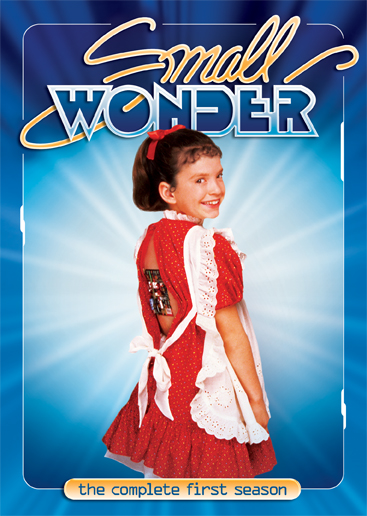 She's fantastic, made of plastic, microchips here and there... she's a Small Wonder!

Small Wonder confirmed the age-old adage: If it looks like a ten-year-old girl and talks like a robot . . . it's a ROBOT!

With Ted's boss and nosy family (the Brindles) living next door, Ted, his wife Joan and their son Jamie must pass Vicki off as a real child. It's easy for Joan (Marla Pennington-Rowan) who can't help doting on her like a daughter, but harder for precocious Jamie (Jerry Supiran), who uses Vicki to do his homework and ward off Harriet (Emily Schulman), the annoying redheaded girl next door.

Small Wonder aired for four seasons in syndication and often reran out of order, to the chagrin of fans (not to mention the writers). All 24 original episodes are included here in their intended order. Small Wonder has withstood the test of time to emerge as a classic laser beacon of '80s culture.