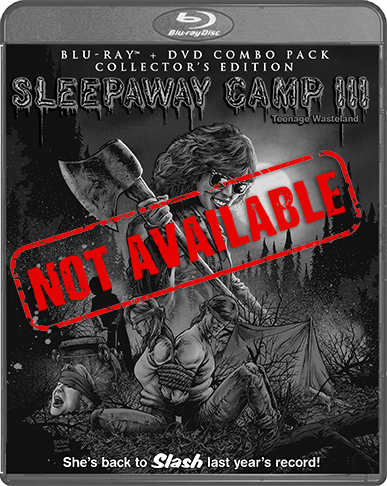 Product Note: As of October 14, 2019, this title is OUT OF PRINT. The limited edition poster has sold out.

Welcome to Camp New Horizons, where an autumn retreat brings together a group of obnoxious rich kids and surly city thugs for an "experiment in sharing." Under new inept management, this is the ideal setting for notorious psychopath Angela Baker (Pamela Springsteen, Sleepaway Camp II: Unhappy Campers) to join the camp and do what she does best – eliminating "immoral" teenagers with everything from a knife to a lawnmower. Michael J. Pollard (House of 1000 Corpses, Bonnie & Clyde), Tracy Griffith (Fear City, The First Power) and Jill Terashita (Night of the Demons) co-star in this third installment of the cult series.

“Everything from how outré Michael J. Pollard is to how gleefully sanguine the campers react to yet another strange disappearance from among their ranks provides Sleepaway Camp III: Teenage Wasteland with the requisite elements of cult classic status. I personally find this film a lot funnier than Sleepaway Camp II: Unhappy Campers. Technical merits range from decent (video) to excellent (audio), but once again Scream has assembled a really impressive supplementary package” – Jeffrey Kauffman, Blu-Ray

With a nice transfer and a bevy of fantastic extras, this release is sure to please even die-hard fans of the series. – Tim Salmons, The Digital Bits

It’s a brainless romp through the woods and Scream Factory makes that trip worthwhile with an awesome Blu-ray release. This is one disc worth being raised up the flagpole. – Michael Tatlock, Mind of Tatlock

“If you're a fan of the franchise, don't think twice about picking this one up. HIGHLY RECOMMENDED!” – Bryan Kluger, High-Def Digest