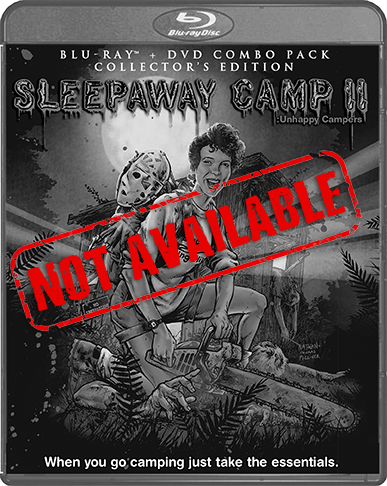 Product Note: As of October 11, 2019, this title is OUT OF PRINT. The limited-edition poster has sold out.

Five years after the horrific slaughter at Camp Arawak, Angela (Pamela Springsteen, Fast Times at Ridgemont High) has created a new position for herself as a counselor at Camp Rolling Hills. Angela is about to teach "bad campers" a brutal lesson in survival when they are sliced, stabbed, drilled… and much worse. Renée Estevez (Heathers, Intruder) and Walter Gotell (The Spy Who Loved Me) co-star in this outrageous sequel to the original cult classic.

"Scream Factory continues to release cult classics on Blu-ray, and horror fans will definitely want to add Sleepaway Camp II: Unhappy Campers to their Blu-ray collection. This sequel is purposely not scary, and it instead ramps up the self-aware humor and ridiculous death scenes. Recommended." – William Harrison, DVD Talk

"The movie is a blast to watch and is so much fun. It’s cheesy for sure, but it has its bloody heart on its sleeve and doesn’t try to be something it’s not…I highly recommend picking this release up!" – Michael Tatlock, Mind of Tatlock

"Sleepaway Camp II is definitely 'campy' but it’s also fun. Fan’s of the series should definitely pick up this release because not only does the HD transfer look fantastic, but it is also jammed packed with plenty of bonus feature." – Popcorn Nights

"I applaud and salute Scream Factory/Shout! Factory for their respect to the horror genre. So often, it gets overlooked, forgotten about, or ignored. Not anymore. As per usual, they load up on the special features. This comes highly recommended for horror fans. There is one particular kill that made me look away and it was just plain disgusting. I mean that in the best possible way." – Tony Farinella, 411 Mania

"Detail during these well-lit scenes show wonderful closeups that reveal every scar, pimple, ounce of blood and sweat, and individual hair on the actor's faces. Even the hilarious 80's clothing look very good here…The video and audio presentations are both commendable here and the extras are all worth watching. If you're a fan of the franchise, this comes highly recommended!" – Bryan Kluger, High Def Digest