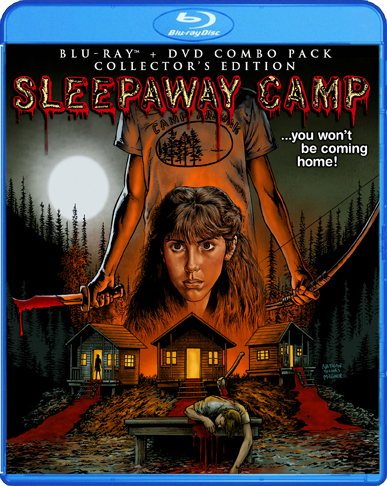 After a terrible boating accident killed her family, shy Angela Baker (Felissa Rose, Return To Sleepaway Camp) went to live with her eccentric Aunt Martha and her cousin Ricky.

This summer, Martha decides to send them both to Camp Arawak, a place to enjoy the great outdoors. Shortly after their arrival, a series of bizarre and violent "accidents" begin to claim the lives of various campers. Has a dark secret returned from the camp's past…or will an unspeakable horror end the Summer season for all?

From its grisly makeup effects to the truly shocking, and unforgettable, climax, Sleepaway Camp is no ordinary slasher film…it's a cult classic!

“Sleepaway Camp has finally been given the royal home video treatment fans have been clamoring for. The new 2K transfer looks just about as good as the film can ever hope, the problems with older DVD’s soundtrack has been fixed, all deleted footage has been reinstated, and Scream Factory has prepped a series of brand new extras, including two commentaries and a retrospective documentary. This collection is highly recommended” — DVD Active

“Overall, this is the be-all end-all version of Sleepaway Camp on home video. The picture is beautiful, the film sounds great, and has a great assortment of extras. Definitely pick this up on May 27. If you are a horror fan, this is a must-own.” — Sleepaway Camp Films

“One of the most notoriously crazy slasher movies of the '80s gets the full Scream Factory treatment and it is glorious.” — DVD Verdict