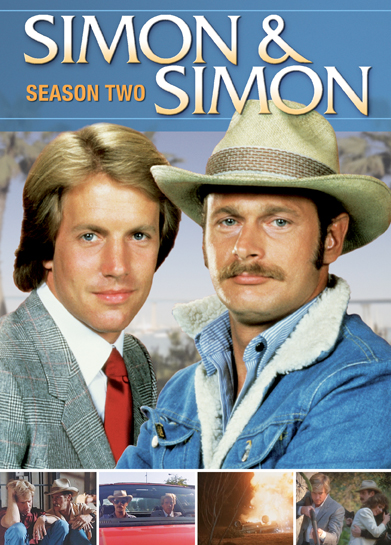 Simon & Simon is classic '80s television — the action series followed another classic, Magnum P.I., in the Thursday-night lineup. Airing from 1981 to 1989, the show followed the Simon brothers as they ran a detective agency in San Diego, California. Despite coming from the same family, Rick (Gerald McRaney, Jericho) and A.J. (Jameson Parker, JAG) Simon were complete opposites. Older brother Rick was a scruffy Vietnam veteran Marine, laid-back with street smarts and an aversion to rules, while A.J. (short for "Andrew Jackson") was a slick, book-smart college graduate who was ambitious and sophisticated.

Season Two (the show's first full season) opens with the brothers working on a case that puts them in contact with Thomas Magnum (Tom Selleck) in a "cross-over episode" of Magnum P.I. (included in this set). From there Rick and A.J. tangle with psychics, investigate mysterious dolphin killings, tackle pro football, go to Vegas, almost go broke, fall in love and solve all their cases.

After a shaky first season, Simon & Simon hit its stride in Season Two, landing in first place in the ratings for the first episode and staying comfortably near the top thereafter. The Simon brothers may have been like oil and water, but for the show’s fans they were a match made in heaven.