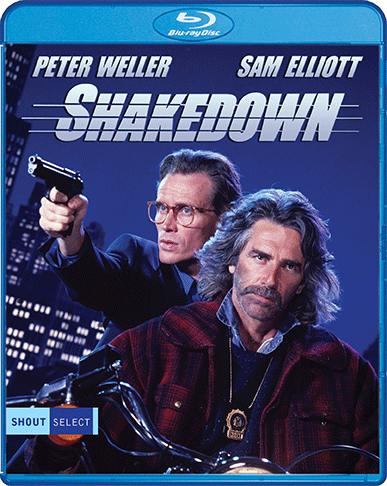 Whatever you do ... don't call the cops.

A burned-out legal aid attorney (Peter Weller, RoboCop) reluctantly teams up with a renegade police detective (Sam Elliott, Tombstone) to find the truth behind the fatal shooting of an undercover cop by a notorious drug dealer.

Targeted by a syndicate of corrupt cops and drug lords, the duo blast their way through the underbelly of New York in their unrelenting search for the shocking truth behind the crime. Filmed on the streets of Manhattan, Shakedown features some of the most incredible stunt work and chase sequences ever shot, including a death-defying fight scene atop Coney Island's Cyclone roller coaster. Delivering non-stop thrills from start to finish, Shakedown is one the most entertaining high-speed cop films ever made and among the best from action genre vet James Glickenhaus (The Soldier, The Exterminator).

“It may not be high art, but fans of 80s action movies will be sure to get a kick out of it and this is easily the best presentation the film has ever had. Recommended as a fun watch.” – Michael Scott, AV Nirvana

“Shakedown is an undiscovered 80’s action classic waiting to be… well discovered.  Thankfully Shout Select has put together a great package for fans and non-fans alike. The film, the transfer, and the extras are too sweet of a package to pass up. High recommendations!” – A.W. Kautzer, The Movie Isle

“James Glickenhaus present an unvarnished portrait the Big Apple and its underworld that's long gone. His Shakedown is brawny and smart and has to be considered one of the most underrated action thrillers of the '80s. It grew on me tremendously from my first viewing on DVD to this deluxe package attractively put together by the good folks at Shout! Factory. Peter Weller delivers an excellent overall performance, ably and subtly demonstrating what a chameleon he is. I will probably be checking out Glickenhaus's entire filmography. Fans of Lumet's Serpico (1973) and Prince of the City (1981) should definitely indulge. VERY HIGHLY RECOMMENDED.” – Dr. Stephen Larson, Blu-ray.com