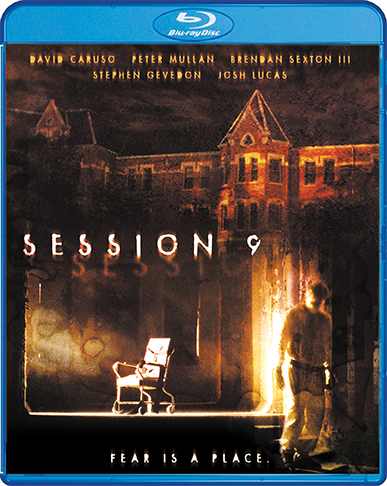 It looms up out of the woods like a dormant beast. Grand, imposing... abandoned and deteriorating, the Danvers State Mental Hospital, closed down for 15 years, is about to receive 5 new visitors.

Donning protective gear, the men of the Hazmat Elimination Co. venture into the eerily vast and vacant asylum that is filled with an evil and mysterious past. Rampant patient abuse, medieval medical procedure and rumors of demonic possession are some of the many dark secrets the hospital holds – but then so do each of the men.

“While it doesn’t tote the coveted “Collector’s Edition” label, this for all intents and purposes very much is.  It has EVERYTHING you’d be looking on one sans the sleeve and new key artwork.  The documentary on here is worth the purchase alone, but the presentation on the film is wonderful as well.  This [is] a definite addition to your collection.” – Brandon Peters, Why So Blu

“When horror was content being a goofy gory parody, 'Session 9' had real guts and teeth to it. Scream Factory has brought the film to Blu-ray with an A/V presentation that is pretty fantastic considering the original digital source. In addition to the original extra features from the DVD being ported over, some new interviews and behind the scenes material round out an excellent bonus features package. If you're a fan of 'Session 9' or even if you're new to the flick, consider this Blu-ray release highly recommended.” – Matthew Hartman, High-Def Digest