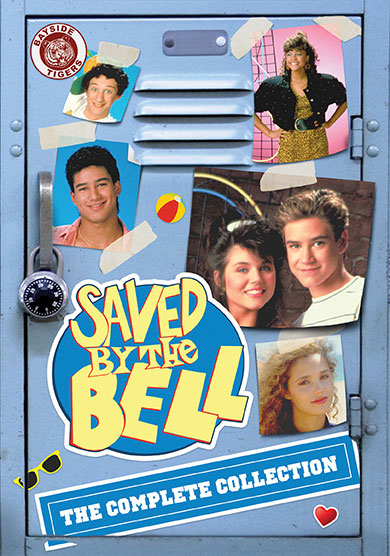 Saved By The Bell: The Complete Collection

Missing your favorite pals from Bayside High? It's alright, 'cause you're SAVED BY THE BELL! Conduct your own class reunion with this Max-ed out collection of the iconic 90s Saturday morning sitcom. The adventures of Zack and his friends – Kelly, Slater, Jessie, Lisa, and Screech – were a cultural touchstone for a generation of teens. Now, you can relive the laughter, lessons, and love (Zack + Kelly 4EVER) all over again. From JFK Junior High to Cal U, Miss Bliss to Mr. Belding, Malibu Sands to Hawaii, and dance contests to "dearly beloved!"

With 118 episodes from all three series – Good Morning, Miss Bliss, Saved By The Bell & Saved By The Bell: The College Years, plus both movies and a locker full of special features, this Zack Morris megaset is a must-have for fans!

A Note About Saved By The Bell: The Junior High Years (1988-89): These episodes were originally aired under the title Good Morning, Miss Bliss starring Hayley Mills in the title role. Set in John F. Kennedy Junior High in Indianapolis, Miss Bliss features Zack, Screech, Lisa, and Mr. Belding in its cast of characters. Although no explanation is given for how or why the four simultaneously transplanted from Indiana to California, these thirteen Miss Bliss episodes were repackaged as part of Saved By The Bell’s run in syndication.

A Note About The Episode Order For Saved By The Bell (1989-1993): Like many television series, the order in which Saved By The Bell’s episodes were produced does not necessarily reflect the order in which they were aired. Consequently, some episodes aired noticeably out of sequence in terms of depicting the ages and shifting relationships between the characters. This is particularly pronounced in Season Three, when Saved By The Bell began airing two episodes a week — usually a school-based episode followed by an “adventure” episode which saw the gang journey beyond the halls of Bayside. In spite of these anomalies, we have attempted to present the episodes in airing order with the notable exception of the “Malibu Sands” story arc, which is presented in sequence here at the end of Season Three, in order to best serve the viewing experience for fans. Executive Producer Peter Engel was consulted on this matter, and he approved our decision to present the episodes in this manner.

Saved by the Bell