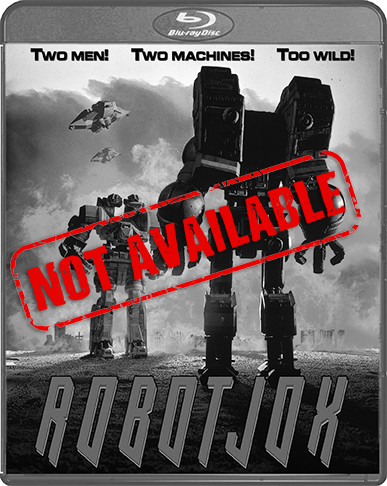 From the mind of cult favorite director Stuart Gordon (Re-Animator, From Beyond) comes Robot Jox, a thrilling sci-fi adventure finally available on Blu-ray from Shout! Factory.

In a future world where war has been outlawed, international disputes are settled in a single winner-takes-all fight between two of the ultimate killing machines. Massive, menacing and made-to-destroy, these human-piloted combat 'bots square off to determine global supremacy. But when tragedy strikes during a crucial battle and treacherous espionage raises the stakes, will veteran robowarrior Achilles walk away from the game for good… or take his revenge against his rival pilot, the homicidal Alexander?

Starring Gary Graham (TV's Alien Nation), Paul Koslo (Voyage of the Damned) and Anne-Marie Johnson (TV's In The Heat of the Night), this riveting (riveted?) sci-fi actioner will crush your burning desire for giant robot-on-robot action!