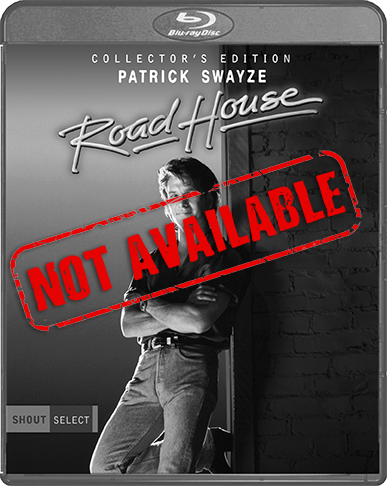 Dalton (Patrick Swayze) is the best bar bouncer in the business, but he's anything but "typical." He's a little small for his trade, has a degree in philosophy and he believes in "being nice." But when he's hired to clean up the Double Deuce in the small town of Jasper, he's pushed to his breaking point. Now it's "no more nice guy" for Dalton as he starts busting heads, leading him to the all-time, no-holds-barred showdown of the century.

“Shout Factory has done right by 'Road House' by offering up a fantastic A/V presentation as well as hours of bonus features. If you've been waiting to pick up 'Road House' on Blu-ray - now is the time to pull the trigger. If you've been waiting for a reason to double dip, it doesn't get much better than this set. Fans of the film should absolutely add this to their wish lists, for everyone else, this Collector's Edition of 'Road House' is highly recommended.” – Matthew Hartman, High-Def Digest

“What else is there to say about this contemporary masterpiece? Road House is one of the most quoted and most enjoyable films of our time, and you likely already know how you feel about the Patrick Swayze-led actioner. Shout Factory's new Blu-ray edition offers strong picture and sound and a host of worthwhile extras. Plus, the replay value here is off the charts. DVD Talk Collector Series.” – William Harrison, DVD Talk

“Road House is a thrill and joy to watch.  It’s a silly movie that commits to selling it in its fullest capacity. Patrick Swayze delivers the perfect performance for it as well.  Whether you like B-action movies like me or you’re a redneck that considers this some sort of way of life; we all think it’s pretty great.  What’s even greater is that Shout! Factory has really REALLY pumped up this film with a hell of a release.  It’s got a good new transfer and a ton of big time new extras for the film.  With this and Buckaroo Banzai, Shout Select has kicked down the door of the Double Deuce and announced themselves as a force to be reckoned with.” – Brandon Peters, Why So Blu

“For those waiting for a definitive Blu-ray release of Road House, look no further than Shout Select’s Collector’s Edition. Featuring a new 2K transfer (supervised by the film’s Director of Photography), two great DTS-HD audio tracks, and the usual horde of new and old special features you’ve come to expect from Shout! Factory, make this Blu-ray a no brainer for fans of the film and an outstanding first release for the new Shout Select line of releases.” – David Snider, Empire or Jedi