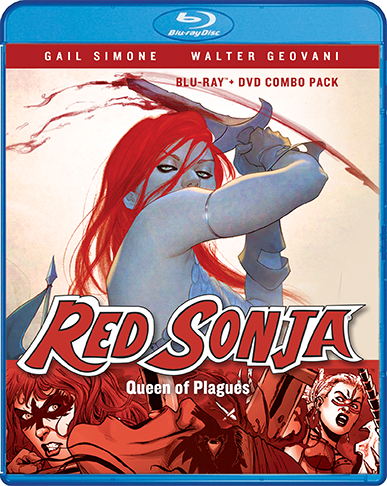 "Gail Simone's Red Sonja is an absolute winner — powerful, thrilling stuff that builds up so much momentum you won't ever want it to end. Richly textured action-adventure with an unforgettable heroine." – Kurt Busiek (Astro City, Avengers)

Red Sonja, the She-Devil with a Sword, intends to pay back a blood debt owed to the one man who has gained her respect... even if it means leading a doomed army to their certain deaths! Who is Dark Annisia, and how has this fearsome warrior accomplished what neither god nor demon has been able to do: force Sonja to her knees in surrender? An epic tale of blood, lust, and vengeance, Queen Of Plagues takes Red Sonja from the depths of her own grave to the heights of battlefield glory.

From Gail Simone (Batgirl, Birds of Prey) and Walter Geovani (Vampirella, Witchblade), based on the comic series originally published by Dynamite (learn more here), Red Sonja: Queen Of Plagues gives the iconic fantasy heroine a fresh new attitude! And now, you can see it all brought to life in this animated comic, starring Misty Lee (Ultimate Spider-Man)!