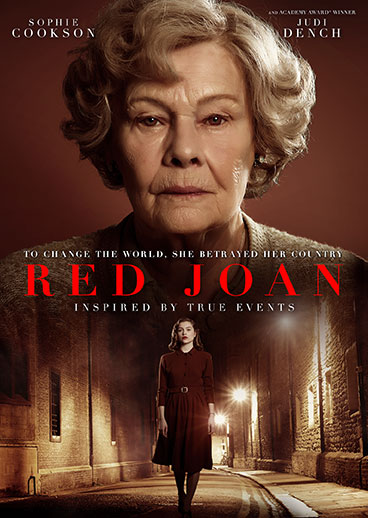 Academy Award® winner* Judi Dench (Skyfall, Quantum Of Solace) stars in this shocking true story of a woman accused of high crimes against her government. Joan Stanley (Dench) is a widow living out a quiet retirement in the suburbs when the British Secret Service places her under arrest. The charge: providing classified scientific information — including details on the building of the atomic bomb — to the Soviet government for decades. As she is interrogated, Joan relives the dramatic events that shaped her life and beliefs: her student days at Cambridge, where she excelled at physics while challenging deep-seated sexism; her tumultuous love affair with a dashing political radical (Tom Hughes); and the devastation of WWII, which inspired her to risk everything in pursuit of peace.

Based on a sensational true story, Red Joan vividly brings to life the conflicts — between patriotism and idealism, love and duty, courage and betrayal — of a woman who spent a lifetime being underestimated while quietly changing the course of history.

*1998: Best Actress in a Supporting Role: Shakespeare In Love