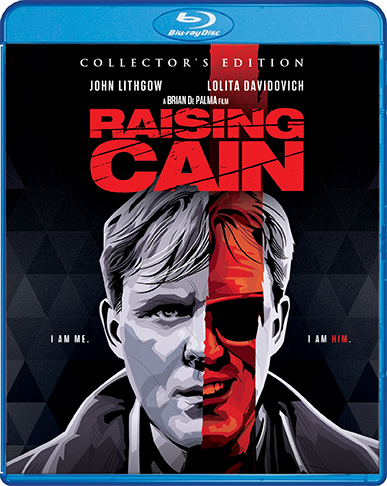 When Jenny cheated on her husband, he didn't just leave...he split.

Double, Scarface, Dressed To Kill) comes a stylish psychological thriller that will keep you on the edge of your seat until the final frame.

of the Planet of the Apes) is a respected psychologist, a loving husband and a devoted father who decides to take a year off to help raise his daughter. Carter's wife Jenny is pleased to have her attentive husband home – at first. When Carter shows obsessive behavior toward their daughter, Jenny becomes concerned, and to complicate matters, Jenny's old flame re-enters her life. But nothing can prepare her for the emergence of Carter's multiple personalities, and a fiendish plot to recreate the infamous experiments of his deranged father.

"Shout Factory's new Blu-ray package might be "release of the year" material: featuring a terrific A/V presentation and plenty of brand new bonus features (including an HD-sourced "Director's Cut" first created in 2012 and approved by De Palma), it's obvious that this two-disc Collector's Edition was created with fans in mind. Highly Recommended" – Randy Miller III, DVD Talk

"Scream Factory’s Collector’s Edition release of Raising Cain is one that not only well represents the film with supplemental material and a great presentation; it actually improves the film as well…The film’s new narrative is so much stronger and more faithful to just being a De Palma film, its actually just flat out better and actually a good solid thriller instead of a bit of a decent one that’s a little harder to swallow (or comprehend).  This is a must have for De Palma fans and those who love seeing really different cuts of films." – Brandon Peters, Why So Blu

"The new Scream Factory Blu-ray looks and sounds fantastic, the new recut is a solid bonus and the new interviews make this a must-own for De Palma fans." – Ken Kastenhuber, McBastard Mausoleum

"This impressive new release of the movie includes a never-before-seen director’s cut of the film with the scenes reordered as originally intended, along with the original Theatrical Cut; both sporting wonderful high definition video and audio presentations. The release also includes a number of exciting extras including a collection of brand new interviews created specifically for this release and more, altogether certain to make this Collector’s Edition Blu-ray an absolute must own for any fans who haven’t already acquired their copy." – Kevin Lovell, Screen-Connections