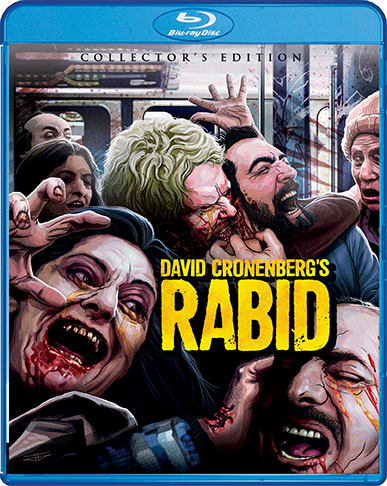 After undergoing radical emergency surgery, Rose (former adult film star Marilyn Chambers in her first leading role in a mainstream film) develops an insatiable desire for blood. She searches out victims to satisfy her incurable craving, infecting them with an unknown disease which in turn swiftly drives them insane… and makes them equally bloodthirsty.

Follow the lovely but deadly Rose through her terrifying ordeal as victim by victim, the spreading circle of casualties grows... until no one can escape their grisly fate of becoming... Rabid.

"With their restoration work and the amount of bonus features included, Scream Factory’s edition is the definitive version of the movie and worth picking up for any fan of one of the greatest horror directors of all-time." – Patrick Bromley, The Daily Dead

"Scream Factory's Blu-ray of David Cronenberg's Rabid is wonderful, the new 2K transfer from the original negative is the best looking version of the movie I have seen and if you're region-locked or just want the one release with the best A/V presentation then this is the one to own."  – Ken Kastenhuber, McBastard’s Mausoleum

"The Shout! Factory Blu-ray produces a fine presentation - and extensive extras. There is a ton of value here for the price - even if you are only a middling Cronenberg fan. This may fully convert you. We give this a very strong recommendation! Great job Shout! Factory!" – Gary Tooze, DVD Beaver