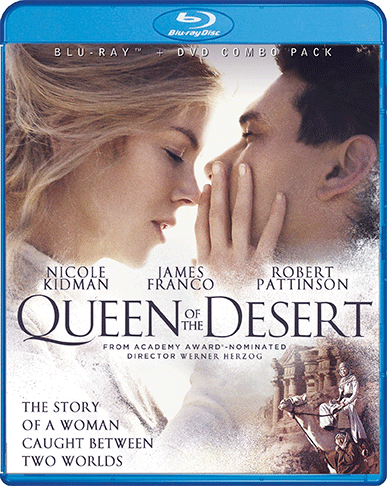 Queen Of The Desert

The incredible true adventures of a woman who defied an empire.

Academy Award® winner* Nicole Kidman and Oscar®-nominated** director Werner Herzog (Aguirre, The Wrath Of God) bring to life the extraordinary story of a trailblazing woman who found freedom in the faraway world of the Middle East. In turn-of-the-century England, Gertrude Bell (Kidman) rebels against the stifling rigidity of life, leaving it behind for a chance to travel to Tehran. There, she begins a lifelong adventure across the Arab world, a journey marked by danger, a passionate affair with a British officer (Oscar® nominee+ James Franco), and an encounter with the legendary T.E. Lawrence (Robert Pattinson). Stunningly shot on location in Morocco and Jordan, Queen Of The Desert reveals how an ahead-of-her-time woman shaped the course of history.

**2008: Best Documentary, Encounters At The End Of The World

Queen Of The Desert