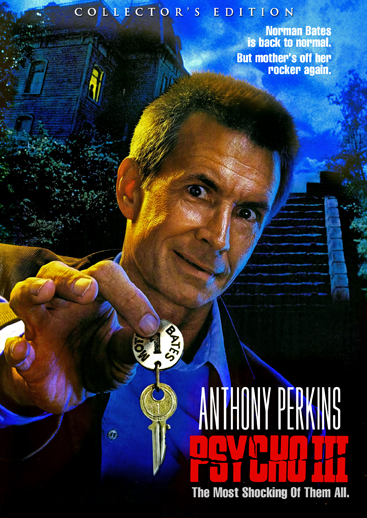 Anthony Perkins returns to the role of Norman Bates and makes his directorial debut in this second sequel to the Alfred Hitchcock classic Psycho.

The Bates Motel is once again the site of something evil as the rehabilitated Norman attempts to help a disturbed young woman, Maureen Coyle (Diana Scarwid – Mommie Dearest), who has left the convent because she can’t find any proof that God exists. Maureen bears a striking resemblance to one-time Bates Motel guest Marion Crane (Janet Leigh) which puts Norman on edge. At the same time, a nosy reporter is snooping around town looking into Norman’s past. Suspense, terror and black comedy worthy of the master himself are in hearty supply in the most shocking Psycho of them all!

" Psycho III excels thanks to it being directed by the man who not only brought Norman Bates to life, but also dedicated a great portion of his life to the character and living in his shadow." — Cinelinx

"With that road for character development cut off, Tony Perkins -- now serving as director as well as star -- and writer Charles Edward Pogue instead opt for an unconventional love story based on the simple question, what happens when Norman meets a woman almost as broken as him?That it manages to effectively wrap that story inside a slasher film (or is the slasher film wrapped inside the love story?) is again a testament to Perkins, both on screen as Norman and behind the camera as director." — Indy Star