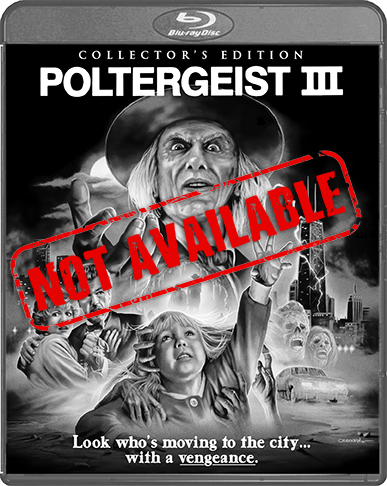 They are back….again! And they're looking for Carol Ann in this riveting finale to the POLTERGEIST trilogy. Sent by her parents to live in a Chicago highrise with her aunt (Nancy Allen, Carrie) and uncle (Tom Skeritt, Alien), Carol Ann discovers she must now face demons more frightening than ever before. Led by the Reverend Kane (now played by Nathan Davis), the spirits have moved from invading homes to taking over an entire skyscraper. They are lurking behind every mirror… waiting. Fortunately, Tangina (Zelda Rubinstein) returns to battle these malevolent forces.

"Shout! Factory's Blu-ray release is a good one, presenting the film in excellent shape and with a nice selection of good quality supplements too. Recommended." – Ian Jane, DVD Talk

“The new transfer is a notable improvement over the previous release and now with a remastered stereo audio mix in addition to the original surround mix - the film has never looked or sounded better. Add in some fantastic bonus features including the lost original ending, this is the disc to own.” – Matthew Hartman, High-Def Digest