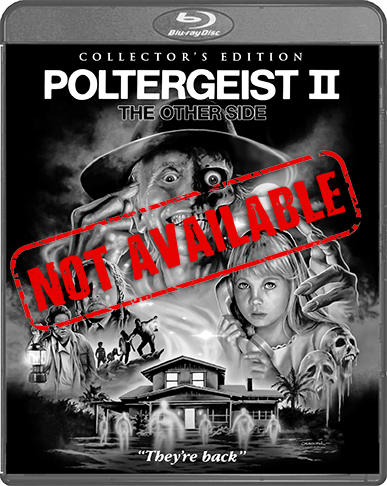 Poltergeist II: The Other Side [Collector's Edition] (SOLD OUT)

Product Note: As of April 27, 2020, this title is OUT OF PRINT. The limited edition poster has SOLD OUT.

"… there are some effective shocks, genuinely scary scenes and a truly creepy villain in Kane." – Moviehole.net

In this thrilling follow-up to the smash hit Poltergeist, the Freeling family (JoBeth Williams, Craig T. Nelson, Heather O'Rourke, Oliver Robins) settles into a new home following the annihilation of their former residence by terrifying visitors from the netherworld. But the spirits of the dead are still hell-bent on luring the family's clairvoyant daughter Carol Anne to "the other side." This chilling sequel, directed by Brian Gibson (Breaking Glass) also stars Will Sampson (One Flew Over the Cuckoo's Nest), Julian Beck (The Cotton Club) and Zelda Rubinstein (Anguish) returns as Tangina.

"Scream Factory's Collector's Edition Blu-Ray of Poltergeist II features a great new transfer highlighting a saturated color scheme along with some great extra features. This is a nice package for the Poltergeist II fan as well as those looking to own this on Blu-Ray in a better package than the previous MGM release." – Ryne Barber, The Moon is a Dead

"Scream keeps dong a fine job with their Collector Editions and we see a clear upgrade over the previous Blu-ray release here. We also get some nice interviews and such in the extras to make people double dip with this one without having to feel bad about it." – Chuck Conry, Zombies Don’t Run

"Even if you bought MGM's barebones 2011 Blu-ray release of Poltergeist II: The Other Side, it is safe to say you're going to need to repurchase based on Scream Factory's stupendous, remastered, features-packed Collector's Edition. This is a pretty standard sequel to a phenomenally successful, much-loved haunted-house movie." – Dustin Putman, TheBluFile.com

"Scream Factory’s Blu-ray presentation is guaranteed to bring the film into a new light, especially for those fans who may have overlooked or dismissed it before. A fantastic video presentation and a bounty of extras make this a Blu-ray release worthy of your time and money." – Tim Salmons, The Digital Bits

Poltergeist II: The Other Side [Collector's Edition]